You are here: Home / Archives for Political Books

Said Kelly: “If John Bolton says that in the book I believe John Bolton… John’s an honest guy. He’s a man of integrity and great character, so we’ll see what happens.”

He added: “I think some of the conversations seem to me to be very inappropriate but I wasn’t there. But there are people that were there that ought to be heard from.”

The book will be published in March.

Out next month: The Nation City: Why Mayors Are Now Running the World by Rahm Emanuel.

“A firsthand account of how cities, rather than the federal government, stand at the center of innovation and effective governance.”

The Nation City: Why Mayors Are Now Running the World
$17.39
Buy on Amazon

Out next month: Shit Is Fucked Up And Bullshit: History Since the End of History by Malcolm Harris.

“A bold rejection of a society in which inequality, student debt, and exploitation have come to define our lives.”

Shit Is Fucked Up And Bullshit: History Since the End of History
$18.99
Buy on Amazon

Laurence Tribe: “A horrible connection if it pans out: On Dec. 30, Trump learned what Bolton’s book would say. Bolton has been pushing war with Iran for years. Iran’s General Soleimani was in U.S. sights for years. Trump suddenly ordered his assassination on Jan. 3, four days after seeing the book.”

John Bolton’s bombshell book that leaked last night now has a title: The Room Where It Happened: A White House Memoir.

It is scheduled for release on March 17.

The Room Where It Happened: A White House Memoir
$16.99
Buy on Amazon

Your support makes this site possible. Join today for the complete Political Wire experience and get exclusive analysis, new features and no advertising.

“President Trump told his national security adviser in August that he wanted to continue freezing $391 million in security assistance to Ukraine until officials there helped with investigations into Democrats including the Bidens, according to an unpublished manuscript by the former adviser, John Bolton,” the New York Times reports.

“The president’s statement as described by Mr. Bolton could undercut a key element of his impeachment defense: that the holdup in aid was separate from Mr. Trump’s requests that Ukraine announce investigations into his perceived enemies, including former Vice President Joe Biden and his son Hunter Biden, who had worked for a Ukrainian energy firm while his father was in office.”

Jonathan Swan: “The revelations present a dramatic 11th hour turn in Trump’s Senate impeachment trial. They directly contradict Trump’s claim that he never tied the hold-up of Ukrainian aid to his demands for investigations into his political opponent Joe Biden.”

Just published: 10% Less Democracy: Why You Should Trust Elites a Little More and the Masses a Little Less by Garett Jones.

“The richest, most democratic nations would be better off if they slightly reduced accountability to the voting public, turning up the dial on elite influence.”

10% Less Democracy: Why You Should Trust Elites a Little More and the Masses a Little Less
$24.33
Buy on Amazon

“As part of President Trump’s impeachment defense team, Alan Dershowitz is expected to argue on behalf of the president at the Senate trial early next week. But in a 2016 book he authored, the famed defense attorney called Trump a ‘destabilizing and unpredictable candidate,’ warning that the then-presidential candidate ‘openly embraces fringe conspiracy theories peddled by extremists,'” NBC News reports.

Dershowitz explained his comments: “I was campaigning for Hillary Clinton at the time. I hadn’t really ever met President Trump and it was just typical campaign rhetoric. I would not repeat that characterization today having met him.”

Coming soon: Sinking in the Swamp: How Trump’s Minions and Misfits Poisoned Washington by Lachlan Markay and Asawin Suebsaeng.

“An eyewitness account of Donald Trump’s clown car of lieutenants and lackeys who have polluted the corridors of power with their unprecedented awfulness.”

Sinking in the Swamp: How Trump's Minions and Misfits Poisoned Washington
$28.00
Buy on Amazon

A must-read: The System: Who Rigged It, How We Fix It by Robert B. Reich.

“An urgent analysis of how the ‘rigged’ systems of American politics and power operate, how this status quo came to be, and how average citizens can enact change.”

Out next month: Cranky Uncle vs. Climate Change: How to Understand and Respond to Climate Science Deniers by John Cook.

“When it comes to climate change, this truly is a golden age—of fake news, post-truths, pluralistic ignorance, conspiracy theories, a willfully ignorant administration, and the Cranky Uncle. You know him. We all have one. That exasperating Thanksgiving blusterer digs in his heels even as the foundation of his denial thaws faster than the Arctic ice caps.” 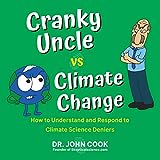 Cranky Uncle vs. Climate Change: How to Understand and Respond to Climate Science Deniers
$16.95
Buy on Amazon

President Trump lashed out at the authors of A Very Stable Genius, calling them “stone cold losers.”

The Guardian reviews A Very Stable Genius as “richly sourced and highly readable.”

“It sheds new light on how the 45th president tests the boundaries of the office while trying the patience and dignity of those who work for or with him. It is not just another Trump tell-all or third-party confessional. It is unsettling, not salacious.”

The Washington Post excerpts a section of A Very Stable Genius where President Trump is meeting with the Joint Chiefs of Staff.

Trump by now was in one of his rages. He was so angry that he wasn’t taking many breaths. All morning, he had been coarse and cavalier, but the next several things he bellowed went beyond that description. They stunned nearly everyone in the room, and some vowed that they would never repeat them. Indeed, they have not been reported until now.

“I wouldn’t go to war with you people,” Trump told the assembled brass.

Addressing the room, the commander in chief barked, “You’re a bunch of dopes and babies.”

For a president known for verbiage he euphemistically called “locker room talk,” this was the gravest insult he could have delivered to these people, in this sacred space. The flag officers in the room were shocked. Some staff began looking down at their papers, rearranging folders, almost wishing themselves out of the room. A few considered walking out. They tried not to reveal their revulsion on their faces, but questions raced through their minds. “How does the commander in chief say that?” one thought. “What would our worst adversaries think if they knew he said this?”

“Featuring more than 60 pages of liberal fun for the whole family.”

“The admirers will not make it past the table of contents. Among the chapter titles: ‘Unhinged,’ ‘Shocking the Conscience,’ ‘Paranoia and Pandemonium’ and ‘Scare-a-Thon.’ This verbiage makes Rucker and Leonnig’s book sound like one more enraged polemic. It isn’t. They’re meticulous journalists, and this taut and terrifying book is among the most closely observed accounts of Donald J. Trump’s shambolic tenure in office to date.”

“It reads like a horror story, an almost comic immorality tale. It’s as if the president, as patient zero, had bitten an aide and slowly, bite by bite, an entire nation had lost its wits and its compass.”

"There are a lot of blogs and news sites claiming to understand politics, but only a few actually do. Political Wire is one of them."

"Concise. Relevant. To the point. Political Wire is the first site I check when I’m looking for the latest political nugget. That pretty much says it all."

"Political Wire is one of only four or five sites that I check every day and sometimes several times a day, for the latest political news and developments.”